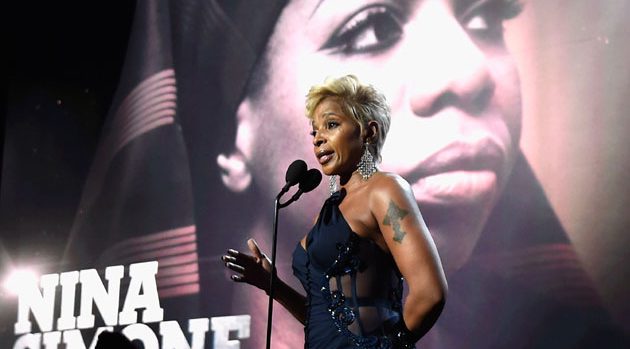 Simone was inducted by Mary J. Blige, who called the pioneering R&B singer “bold, strong, feisty and fearless, and so vulnerable and transparent all at the same time.”

“Her voice was so distinctive and warm and powerful; I never heard anything like it,” Mary continued. “She knew who she was and she was confident in what she did and why she did it. But it was often the lack of confidence in herself that people could relate to.”

Simone’s brother, Dr. Samuel Wayon, accepted the honor on his sister’s behalf, but then warned that any artist who wanted to pay tribute to Simone by sampling her songs had better pay for the privilege.

R&B star Andra Day, backed by The Roots, then performed “I Put a Spell on You” and “I Wish I Knew How It Would Feel to Be Free,” while Lauryn Hill sang “I Ain’t Got No Life” and one of Simone’s best-known songs, “Feeling Good.”

Alabama Shakes singer Brittany Howard paid tribute to inductee Sister Rosetta Tharpe, the late gospel and electric blues guitar pioneer who was an influence on what later became rock and roll.  She performed “That’s All” and “Strange Things Happen Every Day,” with Paul Shaffer on piano.

Bon Jovi, The Moody Blues, The Cars and Dire Straits were also inducted at the ceremony.  Highlights will be broadcast on HBO May 5.