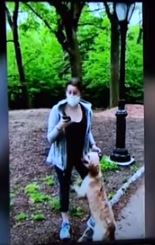 In Central Park Amy Cooper, the woman who spawned a viral outrage by calling the police on a black bird watcher in Central Park is apologizing for her ‘Karen’ moment. After the man asked ‘Central Park Karen’ to keep her dog on its leash, she threatened to tell police “an African American man is threatening my life”, then called the cops to report the man “recording me and threatening me and my dog”.  The video has been viewed over 21 million times. On Monday night Cooper changed her tune, saying she’s “not a racist” and that “I sincerely and humbly apologize to everyone, especially to that man and his family.” Cooper says he was scared being alone with a man in a wooded area and told CNN that her “entire life is being destroyed right now”.  She was so afraid she walked up to him a pointed for him to stop videoing her. Got it! Her employer, an investment firm, initially placed her on administrative leave but since has parted ways with her. Yesterday she weaponized calling the police on a Black man for no reason, today she is sorry.