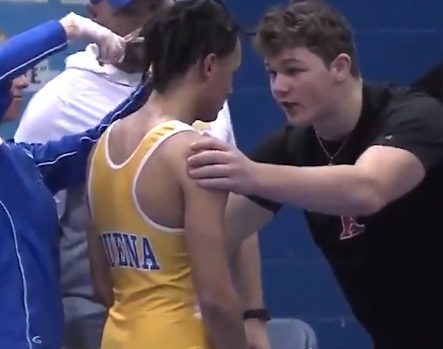 UPDATED: A New Jersey high school wrestling referee has been benched after forcing #wrestler Andrew Johnson to either cut his #dreadlocks or forfeit the match. Johnson chose to compete. Outrage over the incident has grown on social media. The New Jersey Attorney General’s office is investigating.

KRNB – In video that has gone viral, a  New Jersey high school wrestler forced to cut locks or forfeit match.  The order to cut the locks came from referee Alan Maloney who has a questionable past in regard to race.   ABC News reports that in 2016 Maloney reportedly called a fellow referee the N-word during an argument at an event the two were attending.

Watch video from the incident:

Teammates and coaches comfort a visibly distraught New Jersey high school wrestler, who was forced by a referee to cut off his dreadlocks or forfeit his match, prompting accusations of racial bias. https://t.co/YrGNiPQiBm pic.twitter.com/DDM6t7AYbX